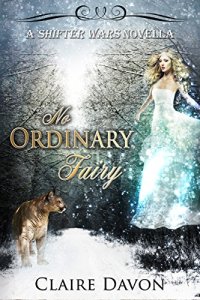 Mysterious. Magnetic. Deadly. And his only hope.

When the new guy in town blows into Pani’s pet shop, bristling with impatience as icy as the Wyoming winter, she knows instantly he’s not there to buy dog food. She also knows exactly what he is. A cougar shifter. An apex predator not unlike herself.

Rafe Anderson needs help, which isn’t easy for a cat to admit. Not only has his dog mysteriously vanished, so has his ability to shift. The only creature who can find both is Pani, a woman the local coyote pack warned him to avoid. But he’s desperate—and running out of time. The longer his cat is caged, the closer he edges to insanity.

As a Vila, a fairy with the power to enchant men, even to their death, Pani has never dared reveal her true self, much less fallen in love. But something about Rafe’s fiery green eyes and uncommon vulnerability calls to her. And his touch tells her the feeling is mutual.

Desire rolls over them like thunder, but their search uncovers a dangerous secret that could turn everything to ashes…and bring destruction howling down upon all shifter kind.